I am just getting worse and worse at adding new entries to this blog. I really must put a daily alarm somewhere to remind me to write something here. 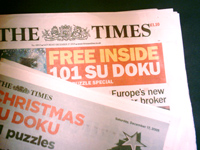 Someone from the Times newspaper emailed me last week, looking for some Sudoku for a special Christmas supplement. I said that we could provide Sudoku that match their existing difficulty ratings (with improvements) and so they took on 72 of our Sudoku from easy to fiendish. The fiendish Sudoku puzzles are actually harder than the usual puzzles in the Times, so if you have a copy of the supplement then these puzzles should take quite a bit longer to complete than normal.

In other Sudoku news, the Big Brain Game Sudoku will appear this Thursday at 8pm on Sky One. Carol Vorderman will present the game show with four other celebreties, one of which won the Strictly Come Dancing competition last night. I’ll write more about the show after it airs to avoid giving anything away.